The US National Aeronautical and Space Administration (NASA) Clouds and the Earth’s Radiant Energy System (CERES) measurements from satellites include TOA SRI.  I downloaded monthly CERES TOA SRI for the period from March 2000 through July 2018.  I also have compiled monthly estimates of GMST from the Climate Forecast System Reanalysis (CFSR) output of initial conditions four times per day, with monthly data prior to 2010 provided by the University of Maine Climate Change Institute (UM CCI) and data from 2010 through 2018 calculated from the Climate Data Assimilation System (CDAS) output of 2-meter surface air temperature.

A time series graph comparing TOA SRI with GMST is provided in Figure 1 below (click to enlarge).  It shows the annual cycle of GMST with a peak in July and minimum in January, whereas the TOA SRI peaks in July with a minimum in January – the complete opposite.  At first, this seems counter-intuitive since increased incoming solar radiation should cause increased temperature and yet the data show the opposite.  My guess is that there is a time lag mediated primarily by the oceans and possibly also affected by the much greater percentage of land in the northern hemisphere, but I have not read up on the subject.  This graph also includes centered running 12-month averages (Run 12) for both TOA SRI and GMST.

Figure 4 below compares the CERES TOA SRI with the CFSR tropics (30N-30S) mean surface temperature, which covers the 50% of the global surface that receives most of the incoming solar energy.

The not quite linear cyclical nature of the relationship between SRI and GMST is illustrated by the scatter plot in Figure 5 below.

By lagging the GMST by 6 months, the relationship to TOA SRI looks more meaningful, as seen in Figure 6 below.

I calculated and compiled annual statistics for each year.  During the study period, the 2001-2017 TOA SRI average of the 17 annual averages was 340.023 watts per meter squared (watts/m2) with a standard deviation of only 0.087 watts/m2.  The monthly averages ranged from 329.113 to 351.516 watts/m2.  The annual range in monthly TOA SRI averaged 21.998 watts/m2 with a standard deviation of only 0.106 watts/m2.  The highest annual range was 21.838 and lowest 22.261 watts/m2.  The average percentage of the annual range relative to the lowest month each year was 6.682%.  Note that I did not bother to weight the annual averages based on number of days per month because I do not expect a significant difference.

So, if we assume that the annual range in TOA SRI is the primary driver for the annual range in GMST, then we can calculate that GMST rises (or falls) by 3.775/21.998 = 0.172 K per 1 watt/m2 of TOA SRI change.  The implication is that if a doubling of CO2 causes a radiative forcing of 3.7 watts/m2, the corresponding rise in GMST would be 3.7 x 0.172 = 0.635 K and this would include any feedbacks that normally occur in the earth system over an annual cycle.  The main difference is that the ramp up in solar input from orbital eccentricity occurs over only a 6 month period each year, whereas the doubling of CO2 might take on the order of a century.  However, both are responses to changes to the earth’s radiation balance.  So far, I have not been able to think of any compelling reasons why the difference in time scales would make much difference in the resulting effect on GMST.  Possibly the short period cycling of the solar input may not allow enough time to reach full impact on GMST in either direction, leading to a quasi-steady state oscillating result?

I’m afraid this assessment may be too simplistic or that I may have overlooked some important influences.  Thus, I’m not at all certain this approach is a valid method for estimating the effect on GMST from a doubling of CO2.  I will be interested hear what readers have to say and I would be especially interested in learning how well the global climate models handle this annual cycling of both TOA SRI and GMST.

There has been a sharp decline in the number of Arctic buoys reporting temperature measurements to the global synoptic weather network the last couple of years, as compared to the previous several years. Below are comparisons of synoptic temperature observations for 1200 Universal Time Coordinates (UTC) on January 1 for each year from 2019 back to 2015 for the Arctic Ocean area. The first set of maps below, Figures 1 through 5,  are standard plots of weather data, including temperature (upper left from station circle), from the National Oceanographic and Atmospheric Administration (NOAA) Weather Prediction Center (WPC) for the southwestern portion of the Arctic Ocean.  Notice the increasing number of open ocean buoys reporting going back each year.  Click on any of the maps to see the full size image. 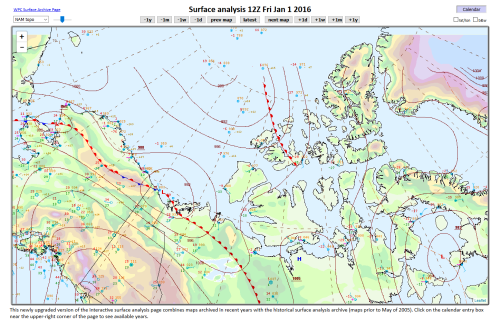 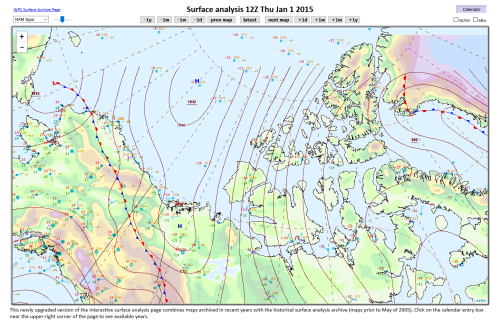 The next set of maps, Figures 6 through 10, show plots of synoptic temperature observations from OGIMET for the entire Arctic Ocean area for January 1 at 1200 UTC for each year from  2019 back to 2015.  Again notice the increasing number of temperature observations from the open Arctic Ocean going back each year.    Click on any of the maps to see the full size image.

Figure 6. Synoptic temperature observations for 2019 January 1 at 1200 UTC for the Arctic Ocean.

Figure 7. Synoptic temperature observations for 2018 January 1 at 1200 UTC for the Arctic Ocean.

Figure 8. Synoptic temperature observations for 2017 January 1 at 1200 UTC for the Arctic Ocean.

Figure 9. Synoptic temperature observations for 2016 January 1 at 1200 UTC for the Arctic Ocean.

Figure 10. Synoptic temperature observations for 2015 January 1 at 1200 UTC for the Arctic Ocean.

Why the temperature measurements from these buoys are not being reported to the global synoptic weather network is puzzling, especially considering that much of the recent global warming has been occurring primarily in the winter night-time Arctic area.  I am also not certain whether any of these buoy measurements are being ingested into global weather models and associated reanalyses, separately from synoptic weather data.  It would be a shame if they are not.

The IABP also provides data and graphs of data from the Arctic Buoys here.   In the past I have compared the detailed buoy measurements from IABP to OGIMET plotted synoptic observations and code that were reported from some of the buoys.  I found that in some cases the IABP reported “surface temperature” from underneath the hull of the buoy was being erroneously reported in the synoptic data as “air temperature”.  Graphs of the IABP data indicate that the “surface temperature” (which is typically from ice or water beneath the buoy) is often substantially different than the “air temperature” when both are reported.  I also found flat-lined air temperatures and air temperatures that did not match well with those from nearby buoys in both data sets.  But these are different problems to investigate for another day.