Mauna Loa on the big island of Hawaii is probably more famous for being a large active shield volcano and for carbon dioxide and solar measurements than for temperature measurements.  However, the Mauna Loa Observatory (MLO) has been making continuous temperature measurements since 1977 and the data return is overall very good.  The observatory is run by the Earth System Research Laboratory (ESRL) which is part of the US National Oceanic and Atmospheric Administration (NOAA).  For more information, see this link: Mauna Loa Observatory.

The observatory is at an elevation of 3,397 meters (11,141 feet) above mean sea level about 5 kilometers (3 miles) north of the Mauna Loa summit that reaches to 4,169 meters (13,679 feet) above sea level.  See the map below for the position of the observatory relative to the summit.

Contour map of the summit of Mauna Loa.
The observatory is at the location labeled “Weather Station”.

Below is a photograph of the MLO looking north toward Mauna Kea.  The tall tower has temperature sensors at 2 meters, 10 meters, and 35 meters above ground level.

I downloaded hourly meteorological data that is available by FTP from the ESRL web site here: FTP Data Finder.  I loaded the data into an Excel workbook by year and compiled daily, monthly, and annual statistics for temperature at 2 meters above ground level.  The average annual data return for temperature at 2 meters over the period from 1977 through 2015 was 97%, but there were a few fairly large gaps in the data.  The largest gap was from March 29 to April 29 of 1984. Since most of April was missing, I removed it from the data set.  I also compiled annual weighted means using the monthly averages in an attempt to make sure every month was weighted the same from year to year even if there was substantial missing data.  This is not a perfect approach and is subject to increased uncertainty if there is a large data gap near the beginning or end of a month where temperatures are normally rising or falling on average over the course of the month.  So, the incompleteness does add a small amount of uncertainty to the results, especially for the years with the lowest data returns – 1984, 1993, and 2001 with data completeness of 87, 88, and 88 percent respectively.

The annual average temperatures and associated trend are displayed in Figure 1.  The data show a fairly significant upward trend of +0.0264 degrees Celsius (C) per year (Coefficient of Determination R2=0.2537).  This temperature trend corresponds to +1.03C over the 39 year period of record and to +2.64C if it continued for 100 years.

Even though MLO is in the tropics at a latitude of 19.5 degrees north of the equator, the temperature shows a pronounce seasonal pattern as can be seen in Figure 4.  On average the highest monthly average temperature is for June and the lowest for February.

Figure 4. Mauna Loa monthly average temperature for 2015 as compared to the most recent climatological reference period of 1981 through 2010 (click to enlarge).

The most recent 1981-2010 standard climatological reference period averages are 5.2C for February and 9.1C for June.  Figures 5 and 6 show the temperature trend graphs for these two months respectively.

Regardless how the data are sliced, the temperature trend at the MLO is significantly upward, although with a hint of a slower increase since 1995.  There is a slight chance that expansion of the observatory over time could have an effect similar to a miniature urban heat island that increases over time with the expansion.  How much influence the expansion might have on the temperature trend is difficult to determine without additional information about potential heat sources at the observatory and how they may have changed over time.  Even if we assume that such influences are insignificant, the upward temperature trend could be from natural causes and not necessarily from CO2.  From what I recall reading, hypothetical warming induced by CO2 should occur primarily at higher latitudes and not in the tropics.  Consequently, the observed upward trend is likely to be from unknown natural causes or possibly from increasing localized heat influence over time or both.

In looking at weather stations around the world, one stands out as a fairly unique and potentially representative indicator of temperatures in the lower troposphere for at least higher latitudes of North America and perhaps also fairly relevant for higher latitudes in all of the North Hemisphere.  This unique weather station is located at the top of Mount Washington in New Hampshire in the Northeastern US at an elevation of 1,917 meters (6,288 feet) above “mean sea level” (which is not so easy to define, but that’s another story).

Below is a US Geological Survey topographic map of the area.  Mount Washington is the highest of several high peaks oriented roughly south to north in the Presidential Range.  This orientation may help to orographically increase wind speeds with high westerly or easterly winds.

Below is a view of the peak without snow. 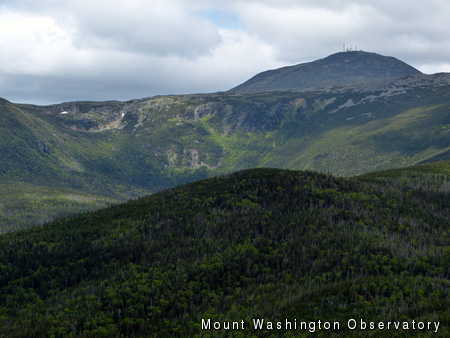 Below is a winter view with heavy snow cover on the mountain. 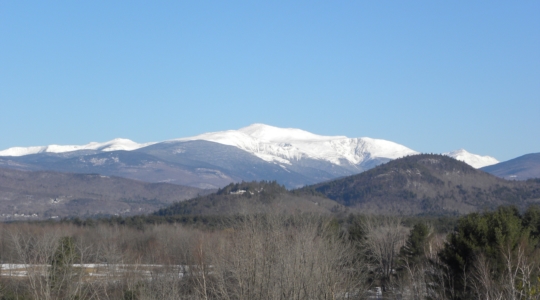 Below is a closer look at the round observatory at the top of the mountain. 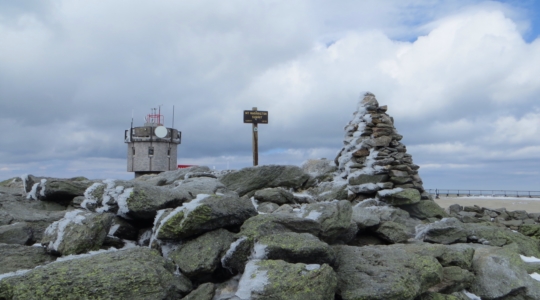 Below is a photo of the observatory covered in snow.

And a closer look at the observatory coated in rime icing in 2004. 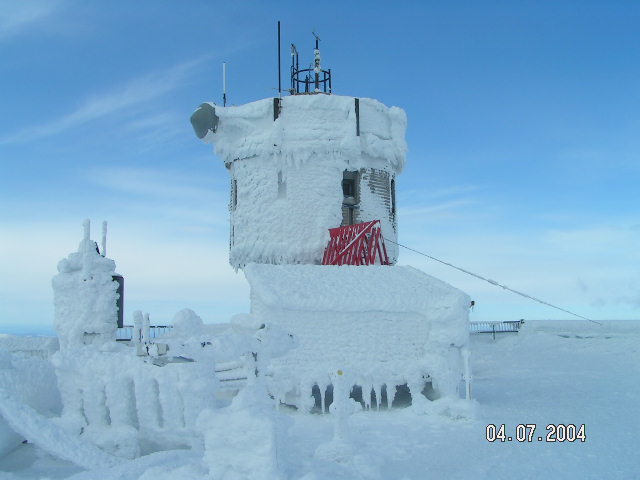 This location is very remote, far away from any urban areas.  However, the temperature measurements could be subject to microscale effects from the nearby observatory.  Frequent strong winds at the site should help to minimize any such microscale effects.

I made a quick check on the internet for annual temperature data for the site and found some available for 1948 through 2015 from Weather Warehouse.  At first I accepted the data, since it was from what I thought was a reputable source.  However, I was a bit suspicious of it because the annual variability seemed larger than expected and the temperature colder than expected.  So I decided to compare the data with what is available from the Weather Underground back to 1973.  The two data sets did not match and the differences were substantial.

I then looked to see if measurements were available from the National Center for Environmental Information (NCEI) and found they had daily data since 1948, but the entire data set was not available for free.  They did however provide a free PDF monthly copy of the daily minimum and maximum temperature observations which included a monthly average.

I went to the trouble to download every monthly PDF copy since 1948, which took awhile, but was free.  I then hand entered (triple checking) all of the monthly maximum and minimum averages into a spreadsheet and then calculated annual averages.  January 1948 was incomplete, but all other months were complete through November 2015.  For December 2015, I used the hourly measurements available from the Weather Underground, including the reported 6-hour maximums and minimums  to compile preliminary daily and monthly data for December 2015 and preliminary data for 2015.  Figure 1 shows the resulting annual average temperatures and associated linear regression trend (click to enlarge).

Taking a closer look for patterns in the data, I see three distinct periods as shown in Figure 2.  The first period from 1948 through 1968 shows a statistically robust downward trend of -0.0695C per year, or -1.46C over the 21-year period with a fairly high coefficient of determination (R-square=0.5466).  During this period global carbon dioxide (CO2) concentrations were beginning to accelerate higher from human influence increasing from about 310 parts per billion (ppb) to about 322 ppb based on ice core measurements.  This is an increase of about 4%.  In contrast, Mount Washington temperatures decreased.  The mean annual average for this period was -2.8C.

In 1998 there was a large high spike in the annual average temperature that may be related to global effects from the El Niño event that peaked in late 1997 and early 1998 in the tropical central and eastern Pacific Ocean.  For the period 1998 through 2015, the Mount Washington annual average temperatures again show large variations and only a statistically weak trend, in this case slightly downward at -0.0122C per year or -0.22C over the 18-year period.  However, the mean annual average temperature for this most recent period was -2.0C, which is 0.8C higher than the previous two periods.  This change appears to be a step jump that is not consistent with the steady rise in CO2.  The Mauna Loa CO2 annual averages increased from 367 ppb in 1998 to 401 ppb in 2015, or an increase of 9%.

I also looked at the trend in average maximum and average minimum temperatures at Mount Washington as shown in Figure 3.  Trends for both are very similar to the annual average trend.  All of these trends are statistically low confidence, but do show an overall small upward rise across the 1948-2015 period.  Interestingly, the temperatures for the last two years are lower than for the first two years.

The overall temperature pattern at Mount Washington is very similar during the satellite era to the satellite derived estimates of global lower troposphere temperature patterns and to the Climate Forecast System Reanalysis (CFSR) global temperature patterns described in previous posts.  All of these show evidence of a relatively flat period from 1979 to 1997, then a sudden upward jump apparently associated with the 1997-1998 El Niño, followed by another relatively flat period to the present.  These patterns look nothing like the steadily increasing CO2 concentrations and this discrepancy casts a large measure of doubt over predictions of catastrophic global warming caused by man-made “greenhouse” gases dominated by CO2.  If CO2 was the main driver for global temperatures, the patterns should show a consistent match.  The implication is that CO2 is not the main driver of global temperatures.

Note: updated graphs are included in the ENSO page accessible at the top of this page.

The current El Niño that started in 2015 appears to have peaked and to be slowly declining now as can be seen in Figure 1.

This figure compares the Multivariate El Niño Southern Oscillation (ENSO) Index (MEI) provided by the US National Atmospheric and Ocean Administration (NOAA) for the current 2015-16 El Niño versus the 1997-98 El Niño.  Since the satellite global temperature estimates typically show the largest response to El Niño events, global estimates of the temperature of the lower troposphere (TLT) estimates from Remote Sensing Systems (RSS) and the University of Alabama at Huntsville (UAH) are presented in Figures 1 and 2.  Both figures compare the TLT estimates for the 1997-98 El Niño versus the 2015-16 El Niño so far.

If the current El Niño follows a similar pattern to the 1997-98 El Niño, the global TLT estimates may not peak until somewhere in the February to April range.  The 1997-98 El Niño, as well as the 2010-11 El Niño were both followed by strong La Niña cooling events as can be seen in Figure 4 (click to enlarge).  Thus, it seems likely that the current El Niño will also be followed by a strong La Niña, although time will tell.

Figures 5 shows the current Sea Surface Temperature  (SST) anomalies for today (February 7, 2016) which can be compared to the Figure 6 map of SST anomalies for the same date in 1998.  Both maps were provided by the University of Maine Climate Change Institute.  Click on these figures to enlarge.

For monthly updates to key figures, see the ENSO page accessible from the menu bar at the top of this page.